Here is a new excerpt from Chapter One of Lovers Undercover: Devoted - Enjoy!!

Logan craned his neck looking for a glimpse of her but knew it would be difficult to find her in this crowd. They had agreed she would wait for him by the Delta baggage carousels at Charles de Galle International Airport, meeting here instead of Las Vegas, where they were in the process of moving while he headlined at a theater there. All of Scarlett’s family had flown to France to celebrate her grandfather’s ninetieth birthday, and they considered Logan part of the family.
Finally he spotted her by one of the gates to the baggage claim area waving at him. Damn she looked fine. The two hadn’t seen each other in six long weeks. But there she stood waiting on him; her dark hair down, touching her shoulders. He noticed her floral halter dress and sandals, and could feel himself becoming aroused at the mere sight of her.
Logan walked as fast as he could, scooping her up in his muscular grip. He quickly breathed in her scent and the Coco perfume she always wore.
“God, I’ve missed you,” he growled as he covered her mouth with his in a passionate, needy kiss. Her tongue swirled around his, making him dizzy with desire.
“I missed you too. I couldn’t stand you being away for so long.” 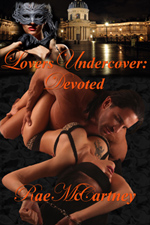 “Well, it’s the last time I ever intend for it to happen. Six weeks is way too long and way unnecessary as far as I’m concerned.”
“Come,” she whispered, breaking free from their embrace. “Let’s get your bags. Did I mention we have my parents place to ourselves? They’ve gone on to the country to prepare for grand-pere’s party.”
“No, you didn’t tell me. All to ourselves, huh?” he replied, looking at her with a smoldering smirk that had a private meaning only meant for her. Grabbing his bag off the carousel, he took her hand and walked toward the door.
Outside, a black Mercedes limo waited for them. The driver, a middle-aged gentleman greeted them and took Logan’s luggage as he opened the door for the couple. As soon as the door closed behind them, Logan took her in his arms. Logan’s mouth found hers running his tongue over her lips, tasting her saltiness. He slowly parted her lips as he probed deeper inside her mouth, finding her tongue.
“God, baby,” he groaned against her mouth. “We need to get home before I fuck you right here in the car.” Logan began to straighten himself up, kissing Scarlett on the cheek and mouth.